How to update SBAs in Ad Optimiser Print

Some changes (e.g. TACoS, end dates, categories, tags, keywords) can be done via metoda Campaign Managemer at any time (Case 1), for others (e.g. headline, images, ASINs) it is necessary to stop the existing campaign, copy, update and submit a new campaign (Case 2).

To make changes in existing campaigns, go to ad-optimiser.metoda.com

Simply select the campaigns you want to change by ticking them and click "EDIT CAMPAIGNS".

The edit product screen opens and you can type in the changes that you want to make. All fields that are left blank will be saved without making any adjustments. Only fields into which you have typed something will be overwritten with the new input.

Example: In the the example below, only Category, Start Date, End Date and Target ACoS will be considered and updated in case it changed 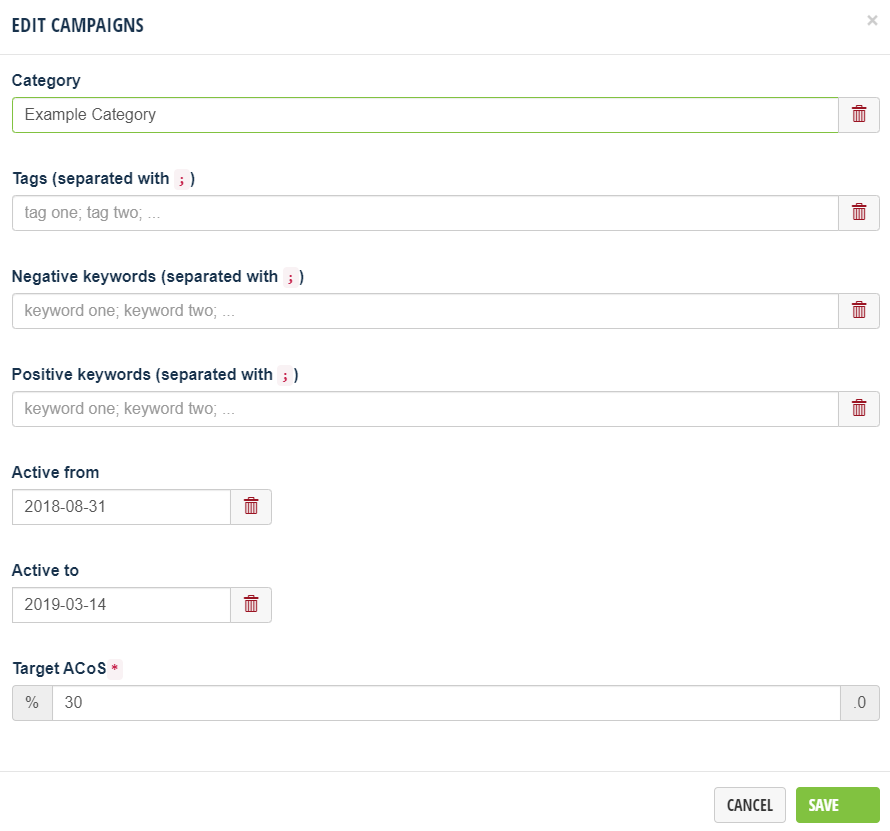 Note. If you would like to add new product tags/category you have to fill in all of them into the cell including the existing ones (in the same cell, separated by semicolon).

For other adaptions like e.g. headline, images or ASINs the campaign need to be stopped, copied, updated and submitted as new campaign.

You can copy a Sponsored Brand Ads campaign by selecting a campaign for which we will then create a new campaign identical to the existing one. Identical means that the new campaign has the same settings as the copied one in terms of the performance information, keywords, bids, and campaign budget. Further, you can edit any of those settings before finally creating the copied campaign.

If you click on it, you will see the same wizard as for creating a new campaign, but this time it’s prefilled with the source campaign data.

Note: In both cases you need to change the name of the campaign; e.g. use the same name starting with "m_" and add a (2) in the end to recognize it as the updated campaign.

Did you find it helpful? Yes No

Send feedback
Sorry we couldn't be helpful. Help us improve this article with your feedback.